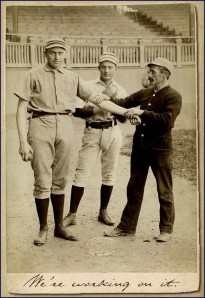 With the start of the new year in 2011, people are starting to turn their attention to baseball and for the players in the Mid Atlantic League, it is no different.  Thoughts start to turn about getting ready for the long season that starts in early April and how they will get ready for it.  Some clubs will start practicing indoors at local gyms, other clubs like the Elkton and Chesapeake City clubs will go on a retreat to Ocean City, Maryland for a weekend to prepare, but what was it like it the 19th century?  How did players get ready?

With the addition of the Mutual BBC of New York to the league, it is a great time to talk about the first base ball club to go south to train.  In 1869, “Boss” Tweed who was the head of the Tammany Hall politcal machine in New York City, sent the Mutuals to New Orleans for Spring Training.  This is one of the first instances of a team going south to train.  Many of the players who were playing base ball were from the north and midwest.  This caused a lot of annimosity for the citizens of the south who were still stung by the Civil War and did not want any Yankees on their “turf”.

In 1870, the Cincinnati Red Stockings who were the very first all professional club traveled to New Orleans to get ready for their season.  They started the 1870 campaign with games across the south.  Even as more and more professional clubs developed, their owners could not afford to send 15 men on an all expense paid “vacation” down south for 6 weeks or more.    Then in 1885, Cap Anson took his club, the Chicago White Stockings to Hot Springs, Arkansas along with a newspaper reporter who publicized their training time.  Unlike most clubs who trained down south, the White Stockings actually went on to win 2 National League Championships after getting an early jump on training.   In 1886, Harry Wright took his Philadelphia Phillies club on a “southern trip” and spent 6 weeks down south getting a jump on other clubs.

In 1888, the first team arrived in Florida for Spring Training.  The Washington Senators went to Jacksonville to start off the season campaign.  Unfortunately, they were not welcomed at several of the town’s hotels as baseball players were thought to be unruely and had a reputation for bad behavior.  Also, hotel owners still had sore feelings from the Civil War and did not want players in their establishments.  When they did find a place that would let them in, they were segregated from the rest of the guests.  By 1890 every National League club was going south in some type of “Spring Training” or “Southern Trip”.

In 1894, Spring Training had a complete make over.  Ned Hanlon from the Baltimore Orioles turned Spring Training in Macon, Georgia in to a “fat farm” and made the players work out 8 hours a day for 8 weeks.  The results were evident as they went on to win 3 straight league titles.    In 1906, John McGraw used Spring Training in Memphis, Tennessee more as a celebration of their previous championship the year before.  Players were paraded in horse drawn carriages to the practice field with horses that had blankets that said “World Champions”

In 1913 more clubs arrived in Florida as the Chicago Cubs came to Tampa after the mayor financed their expenses.  In 1914 more clubs followed the same pattern as Al Lang from St Petersburg offered to pay the St Louis Browns expenses.  He went on to build a ballpark and had a 99 year lease that housed MLB teams for 85 years (the last team abandoned the facility just in the last 3 years).  After the Browns left the facility in 1914 the Phillies followed and then the Braves followed by the Yankees.  The Yankees were drawn their from New Orleans after their owner feared Babe Ruth would be destracted by Bourbon Street.

Teams would slowly all migrate to Florida until 1946 when some transfered to Arizona.  Today, 15 clubs train in Florida and 15 in Arizona.  Clubs throughout history would train in Louisiana, Georgia, Alabama, Arkansas, Mississippi, South Carolina, Florida and Tennessee.  During wartime they would stay close to home and train in such exotic locations as Patterson, New Jersey and Wilmington, Delaware.  Through it all though, clubs are always looking for an advantage to get ready for the upcoming season.  This year’s MAVBBL clubs are no exception.  The first league games are only a couple of months away!

Source: Under the March Sun; A Game of Inches