Each year since 2007, the  state of Maryland clubs have been participating in the Maryland State Championship series.  Each club that is a recognized vintage base ball club within the state is eligible to compete in the State Championship series.  Each club plays a round robin of matches with all of the other clubs within the state.  The club with the best record is declared the #1 seed, second best record receives the #2 seed, etc.  At the end of the season, the single elimination tournament is held to declare the state champion.

In 2007, the Talbot Fair Plays were the regular season champion and hosted the first tournament.  Elkton defeated Chesapeake &amp; Potomac 13-11 and then went on to down the Fair Plays 13-3 to win the first title.  In 2008, Elkton won both the regular season crown and the tournament which they hosted.  In 2009, the tournament was awarded to Havre de Grace who was the #4 seed that year.  They almost pulled off a huge upset but the defending champs prevailed 9-5 in the 8th inning to go to the finals to play Talbot who squeaked by Chesapeake &amp; Potomac.  Elkton once again downed Talbot 13-10 to win its third straight title.

The 2010 State Championship Tournament took place in Jerusalem Mill in Kingsville, Maryland on August 29th.  It was a glorious day of 19th century base ball as the six clubs in Maryland competed for the state braging rights again.  The tournament was seeded based on the regular season standings.  In the first round, Talbot knocked off Arundel 12-0 while Chesapeake downed Havre de Grace 11-10 in 10 innings.  In the second round, Talbot continued its winning ways defeating Potomac 9-2 to get to the championship.  There they would face the Elkton Eclipse who defeated Chesapeake 14-6 in the other semi-final.  This 4 time rematch of the state championship game ended the same way as the previous 3 as Elkton knocked off Chesapeake 19-6 to take home the pennant again.

In 2011, a new point system to determine seedings took effect which caused a shake up in the traditional power structure of the State.  Potomac’s hard fought 5-4 win over Elkton at Loudoun, Virginia in June had far reaching affects as it dropped Elkton to 4th place.  With Havre de Grace dropping out and Chesapeake City becoming eligible, there was a new order in the state.  In the tournament which took place in Glen Burnie, the first round games featured match ups of Chesapeake vs Elkton which just took place the week before.  7 days before Elkton blew out the Chessies, but in the first round of the states, Baltimore held its own before falling towards the end to the Eclipse.  The Potomac Nine rolled over the host Excelsiors to move on to the 2nd round to play the Fair Plays.  Talbot showed why it has been to every final since the tournament’s inception and beat up on a tired Potomac club.   In the other semi final, two teams from the Elkton Base Ball Club squared off-Chesapeake City and Elkton.  The two teams split the series during the regular season and it was thought to be a great game on paper.  In actuality, the Cecils destroyed the 4 time defending champs and would face the Fair Plays in the finals.  In the championship, Chesapeake City showed it belonged winning its first ever state title. 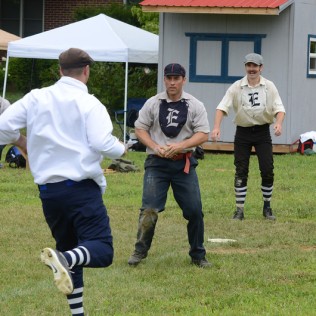