The Atlantic Base Ball Club answered the call of the World Tournament held in Dearborn, Michigan this past weekend.  Teams gathered to recreate an actual tournament that occurred in 1867 with a $300 top prize, just like it was back then!  Half of the team traveled by carriage while the other half was hurled through the air in a tin can yet somehow arrived safely many states away.

The Atlantics first round opponents in the single elimination tournament were the Petoskey Mossback BBC.  The Atlantics took the field first and although a batter reached base he could not make his ace.  When it was the Atlantics turn to bat, bat they did.  Seven tallies were counted before three hands were down.  The Mossbacks had difficulty getting hits off of Ed “Pigtail’ Elmore’s pitching while the Atlantics scored five more aces in the third inning and four more in the fifth.  The Mossbacks eventually scored an ace in the fifth and one more in the seventh but it was too late as the Atlantics prevailed by the score of 18-2.  Great defense was played at every position to keep the Mossback base runners to a minimum.  Richard ‘Cuz’ Baruso, Frank ‘Shakespeare’ Van Zant, Dean ‘Dreambucket’ Emma and Kevin ‘Flash’ Harrison all had three hits to help the Atlantics move on to the second round.

Awaiting us in the second round was another Brooklyn team, the Walker Tavern Wheels BBC (Brooklyn, Michigan) who had just defeated the Columbus Buckeyes.  The defenses of both squads started strong with the game scoreless into the bottom half of the third inning.  There the Atlantic offense burst out scoring six aces from singles by ‘Tricky’ Rick Stattler, Mike ‘Money’ Hill, Vincent ‘Tuna’ Aurora, a triple by Anthony ‘Dirty Pirate’ Cannino, more singles by Shakespeare, Dreambucket, Sean ‘Toothpick’ Ness and a double by Flash.  The wheels seemed to come off for the Tavern Wheels as they had runners on second and third with one out in the second inning, a runner on third in the third inning with no outs, runners on first and third with two outs in the sixth inning, and the bases loaded with two outs in the seventh inning but could not tally an ace in all of those opportunities. The pitching of Tuna and some good defense kept the Tavern Wheels from scoring just a single run until the last inning where they mounted their last attack to keep their championship dreams alive.  After scoring three aces, with one out a sizzling line drive flew off the bat that Money knocked down at second base and threw to first for the second out and snuffing the spirit of the comeback.  The Atlantics held on for the 10-4 victory and a trip to the semi-final match on Sunday.

Shakespeare led the Atlantics with three hits, while Greg ‘Hawk’ Dengel, Dreambucket, Toothpick and Flash each had two hits as well.

The semi-final match on Sunday morning was against the Bay City Independents BBC and would decide who would play later that day against the winner of the Columbus Capitals and Saginaw Old Golds BBC.

The Bay City team came out strong with three aces in the first inning, but the Atlantics responded with one ace of their own in the first and four more in the second on a bases clearing triple by Cuz.  Bay City got one back in the third inning and the Atlantics kept the pressure up by scoring three more with a double by the Dirty Pirate and singles by Shakespeare, Dreambucket and Flash.  The Bay City Boys kept their heads up though and scored five aces in the fourth, three more in the fifth and one more in the sixth to take the lead.  In the seventh inning, Matt ‘Krawler’ Kouyoumdjian cut down a runner at home on a base hit to right field but it would not be enough as the Atlantics fell by the score of 13-9.

The Dirty Pirate led the Atlantics with three hits and three aces, while Shakespeare, Hawk and Krawler each contributed two hits a piece.

Although the Atlantics did not reach the championships they did not go home empty handed.  The team was awarded the ‘Farthest Traveled’ prize and two Atlantic marksmen, Tuna and Flash were awarded 2nd and 3rd place in the Throwing Accuracy competition. 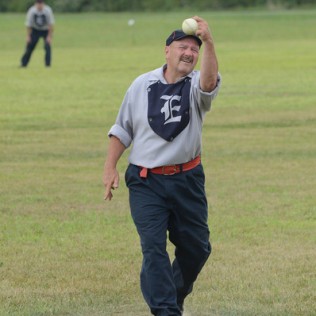