The Brandywine BBC of West Chester, PA made the trek out to St. Louis, MO at the end of July to participate in the 3rd Annual St. Louis Cup hosted by the St. Louis Brown Stockings. The trip was originally planned as a visit home for Matthew “Pins” Hagnauer, but it turned into a club reunion with their former player. The team flew into town on Friday and got right down to business the only way Brandywine BBC can…they rented a party bus. This would be the team’s means of transportation throughout the weekend setting the tone for how things were going to go. They drove through St. Louis a bit on Friday checking out the St. Louis Gateway Arch and the Budweiser Brewery, before heading to Pins’ mom’s house just across the Mississippi River in Dupo, IL where she generously put up the ENTIRE club.

Fast forward through some club hooliganry to Saturday, to the 3rd Annual St. Louis Cup. The setting for the matches was the beautiful Forest Park, home of the St. Louis Zoo and the site of the 1904 World’s Fair. Brandywine BBC was concerned about the rule differences going into their matches being that in the Midwest they play by modified 1860s rules instead of 1864 rules. The biggest concern was that someone would forget that taking a large lead, sliding or stealing was prohibited by the modified 1860 rules. One other major adjustment was that defensive positioning did not allow for any shifts. This meant that the first basemen, second basemen and third basemen must be within two steps of their respective base before the pitch is thrown. Only the shortstop was allowed to play anywhere on the field. Even the outfielders were not allowed to shift. This took some getting used to for the club. The Brandywine BBC played 3 matches in the St. Louis Cup and were defeated by the St. Louis Perfectos (11-3), the St. Louis Brown Stockings (9-5), and the Belleville Stags (31-9). All 3 teams played hard and earned their victories over the Brandywine club. Though Brandywine got beat, they didn’t let that get the best of them. Instead they vowed to come back with a vengeance on Sunday and let St. Louis know how the east coast plays base ball.

Sunday, the day of reckoning, it was hot and humid and a perfect day for base ball. The Brandywine BBC played 2 great matches against their opponents, the St. Louis Unions (8-7) and the Indianapolis Hoosiers (3-2), to pick up two one-run wins. The Brandywine boys were more relaxed going into these games and it showed in their on-field antics. The boys were jabbering back and forth from across the field at each other, something the home teams didn’t seem too accustomed to, but both wins were a combined effort from every player on the club, Bullseye got on base in almost every at bat; Splinter was about the smoothest shortstop you’d ever seen; Colonel was intimidating at the plate and kept the outfield guessing; Pins was stretching and scooping up balls like it was nothing at all; Shaggy displayed his best hitting so far this season sending two the opposite way; Rockwell didn’t let a ball bounce, showing just how manly he is in left field; Shield had the defensive play of the game coming from 2nd to 1st with a flip of the ball to make a crucial out late in the game; Stonewall brought out his heater and left the opponents as lost as a duck in high weeds; Manny broke out not one, but back-to-back triples; Slowhand was our “Midwest Muffin” displaying the poise of a veteran vintage player in left field, at the plate, and with a 6-string later that night!; King played so well his uniform and shoes couldn’t contain him! The captain of the Brandywine BBC more than earned his stripes in this Midwest trip. 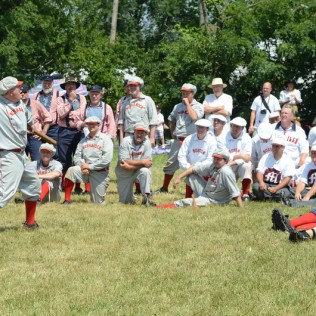