The 2016 season is still 4 months away, but on January 16, the MAVBBL will hold its annual President’s and Scheduling Meeting.  The 2016 edition of the League looks to feature up to 24 clubs from Rhode Island to Washington DC and as far west as Harrisburg, PA.

Each year, the club presidents gather to discuss the previous season and look ahead to what can be done to improve the play of member clubs for the upcoming year.  Loop holes are discussed as well as new research in to the history of the game that could alter the way member clubs have played.  Each year, new language is found from the 1860s that member clubs didn’t know about.  Sometimes, even new ways of play from pitching to hitting stance is introduced to make our game more authentic to spectators who come out and watch us in the upcoming year.  For example, up until just a couple of years ago, clubs would exclaim “Huzzah” after matches.  After research it was found that the correct language should be “Hurrah”.  Words like “hurler”, “behind” and “cranks” have been eliminated from our vocabulary and replaced with “pitcher”, “catcher” and “spectators”.  (Words that are common today and were actually used in the 1860s as well!).  At the end of the meeting, in a scene that looks like its straight off the trading floors of Wall Street, everyone takes about a half hour to meet with other presidents to fill out their 2016 schedules.

If you are interested in playing for one of our clubs or if you have an interest in starting your own club for the future, please contact us.  We have a strong interest in placing clubs in Richmond and Fredericksburg, Virginia as well as Scranton, Allentown, Reading, Lancaster, and Gettysburg, Pennsylvania. 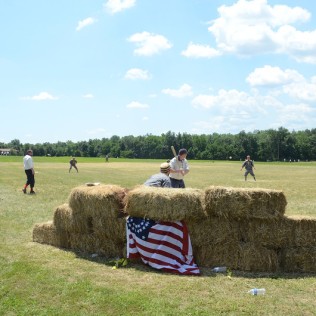