On Sunday June 2nd, with afternoon weather of suspicion, the Old Dominions of Northern Virginia rallied twice to hold 2 wins versus the famed Potomac squad of Washington, D.C. The matches were played at the majestic Oatlands grounds in the heart of Loudon County Virginia. Food (the provisions were most satisfying) was available to cranks who made the journey to Oatlands to see the elephant. The kind Oatlands staff were most hospitable, providing cheers to the ballists, making certain that players were not replete of water, and even lending several muffins to partake in the base ball foray.
The first match started as any other sort, with a zip and whiz of the base ball across the lush green field as the Potomacs, who were victorious in the bat toss and elected to swing the willow first, must have felt the itch to strike and scored 5 tallies by the bottom of the fourth inning. However, veteran Old Dominion hurlers Stoney and Skipper were sound on the goose as they settled down the Potomac bats, allowing only one more run for the rest of the match. The match was tooth and nails after the fifth inning. The Potomac Nine were threatening on the base paths as they must have jayhawked a dozen bases. Fate would soon change, when in the bottom of the 8th the Potomacs were on the shoot with muffin Doug Miller of Oatlands. Doug, a ballist to the manner born, walloped a bases loaded sky ball deep into the rolling meadow scoring 3 aces for the Old Dominions. The jig was up for the Potomacs. The Old Dominions won the first match 10-6.
As clouds and thunder began to make their way towards Oatlands, both clubs ponied up to play another 7-inning match. In the second match, the Old Dominions opened the ball with 4 unanswered aces in the first 4 innings. However, the mighty Potomacs were not to be outdone, scoring 4 tallies of their own in the bottom of the fourth inning. As in the first match, both clubs battled back and forth, with strong hurling and solid defense by the basetenders. That is, until the top of the 7th when Gashouse stepped up to the dish and hit a daisy cutter through infield for a base hit. Then, Roman hit the onion to reach base. Brooklyn and Stoney handily followed to pluck the apple scoring two tallies for the Old Dominions. Stoney whitewashed the Potomac bats in the bottom of the 7th for an 8-6 Old Dominion victory. Huzzah!
Many thanks to our hosts at Oatlands, our friends from the Potomac Nine, and the brave muffins who supported both clubs in the base ball affair.
Advertisement 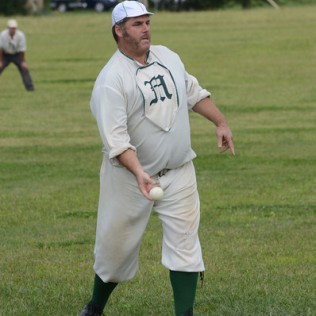 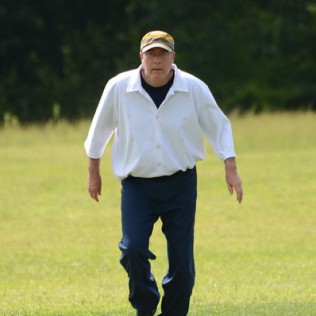