Atlantic traveled up to Cooperstown at the invite of the Essex BBC to participate in a round-robin tournament with the Flemington Neshanock also on hand. The games were played at the Ommegang Brewery, and the beautiful Saturday weather attracted a large crowd. Atlantic faced Essex in the first game, and as usual with Essex, the game proved to be a tough fight throughout, as the lead changed hands many times. Essex scored a run in the 9th to go ahead 12-10, but in the bottom of the 9th, Billy Goat and Willy Mo were on second and third with 2 outs when Tuna came through with a clutch hit to tie the score and send it into extra innings. Atlantic could not contain Essex as they scored 4 runs in their 10th, and then Atlantic scored twice in its 10th, but fell short, losing its first game of the year, 16-14. Dreambucket, with a double, triple, and home run, and Shakespeare and Toothpick each had 3 hits for Atlantic, and Tuna contributed 2 hits .

In the second match, Atlantic faced Neshanock, and after tossing them a goose-egg in the first, wasted no time in taking control of the game, scoring 12 times in its first and coasting to a 16-5 victory. Dreambucket had 3 hits to lead Atlantic, while Dirty Pirate, Shakespeare, Hammy, and Tuna each picked up 2 hits. Pigtail was between the lines and picked up the win.

Essex and Neshanock played each other the last game on Saturday and the first game on Sunday, with Neshanock taking both games, shutting out Essex in the Sunday game.

Sunday morning greeted us with clouds and a slight drizzle, but by the time we were ready to play, the rain had subsided. Atlantic first faced Neshanock this day, again using big innings to surge ahead, scoring 5 in the first, 8 in the third, and 4 in the 5th, to take the match 19-6. Willy Mo led Atlantic with a 4 for 4 game, and Krawler and Toothpick had 3 hits apiece. Dreambucket, Shakespeare, Hammy, and Pigtail added 2 hits each. Pigtail also picked up the victory in this game.

The final match saw Hammy take to the lines to avenge the previous day’s loss to Essex. He gave up a run in the top of the first, but before Essex could plate 4 more runs in its 5th, Atlantic already had a 15-1 lead. Atlantic added a final run in its 5th, then held Essex for the 16-5 victory. Dreambucket went 4 for 4 for Atlantic, and Tuna continued his fine hitting weekend with 3 more hits, while Toothpick, Hawk, Hammy, and Pigtail each had 2 hits. Hammy had avenged the loss and notched the victory. 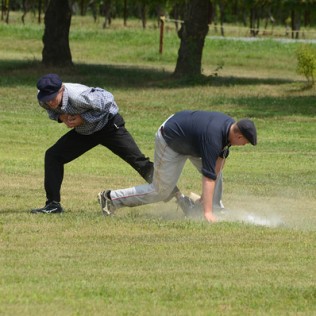