Elkton, Maryland- The Essex Base Ball Club from Massachusetts made their first trip to the Old Line State for a pair of games at the Terrapin Station Winery in Elkton.  In the first match, the Diamond State BBC of Delaware squared up to play the club from outside of Boston.  In a well played match, the Diamond States came away with a hard fought 13-11 victory.  In the second game of the day, the Eclipse tried their hand with one of the finest clubs on the east coast.  The yankees from New England jumped out to a 8-1 lead before Elkton came back with a 6 spot to come within one.  After several scoreless innings, the Essex club pulled out to a 12-7 lead going in to the bottom of the ninth.  For the fourth time this year, the Elkton nine came roaring back in the 9th scoring 6 runs in the last frame with 2 outs to pull out a 13-12 victory.  The Eclipse only scored in 3 innings all day but made those innings count.  Afterwards a grand crab feast was held in honor of the Essex club.  A grand time was had by all and the Eclipse look forward to going to Massachusetts in 2013 for a Lobster feast. 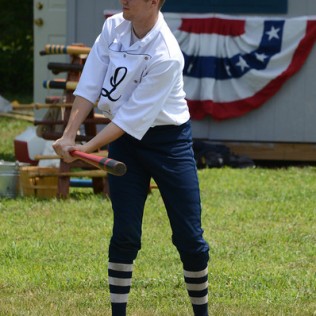