The Mid Atlantic Vintage Base Ball League kicked off its 2011 season this past weekend with 3 matches scheduled.  The MAVBBL starts its 3rd season with the most clubs ever participating for the league crown.   This year’s highlight will certainly be the all club MAVBBL Tournament which will take place August 20 and 21st and all full member clubs are invited  to the 2 day event.  The top 6 clubs at the end of September will compete in the league championship.  Most importantly though, we now have clubs from Connecticut to Washington DC all working together to put out a quality product for the public so its fans can see what base ball was like in the mid 19th century.

The season got started Saturday with a double header between 2 teams within the same club.  Two of the older clubs in the south met up for a rivalry game and an important Southern Division matchup.  In the first game, the Potomac Nine of Washington outlasted the Chesapeake Nine of Baltimore 13 to 8.  In the nightcap, Potomac once again came out on top 11-4 over the Chessies.  The next day, the new look Cecils (formerly the Bohemia Eurkeas) traveled to Glen Burnie to take on the Arundel Excelsiors.  The Cecils were showing off their brand new uniforms which are some of the finest now in the league.  The Cecil’s picked up right where they left off last year and downed the hosts 20-3 and then 17-8 in the finale.  Last year as a muffin club, the Cecils qualified for the championships finishing in 3rd place.    In the 3rd match, the Eclipse BBC of Elkton traveled up to Philadelphia to challenge the Athletic. No less than two 21st century television (?) stations were in attendance as well as several members of the newspaper press to publicize the game on local media. The Athletic sported a brand new glorious field which includes the city’s monument to the Union participants in the Civil War from the city of Brotherly Love within a well struck hit to left field.  The Athletic took a 3-0 lead in the top frame and looked very much improved from last year’s inagural campaign.  After 5 strong innings, the Athletic’s wheels fell off and the Eclipse got in to gear downing the hosts 27-6 and then 34-3.  Opposing clubs playing Philadelphia will instantly see that they will be a club to recon with as the season progresses.

Next week, we’ll be featuring our new vendors as well as our existing ones that supply equipment, uniforms and other goods to our member clubs.  A full schedule of games kicks off next weekend including the Cecil’s version of the Chopper in Elkton.  Stay tuned for more great stuff coming soon! 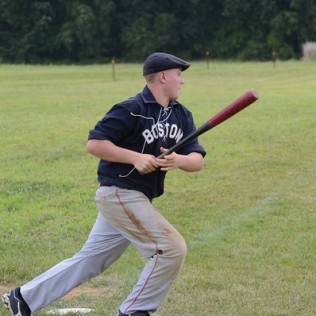